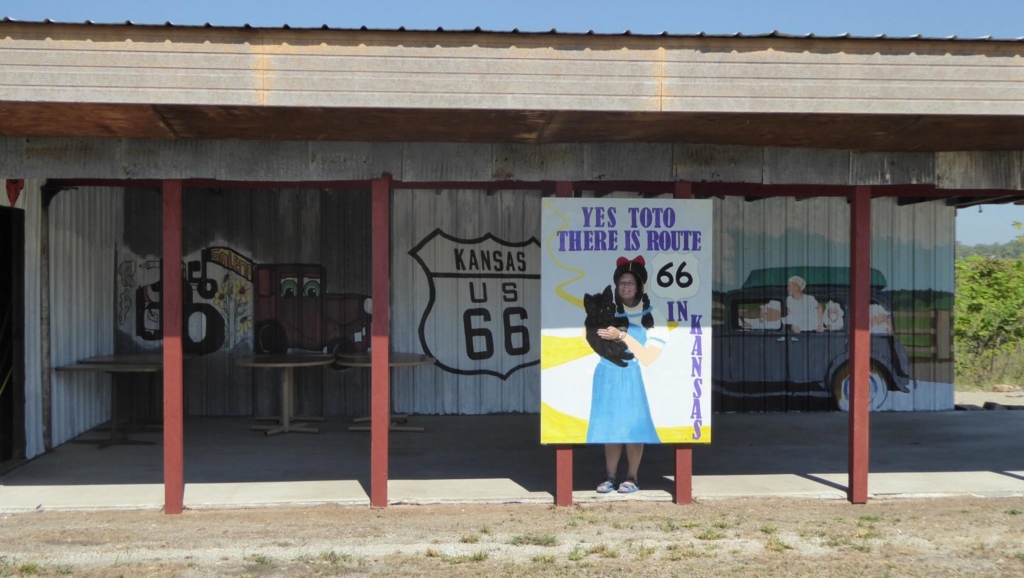 ... but before I get to the start of this famous roadway, I had a quick pit stop in the Big Apple! 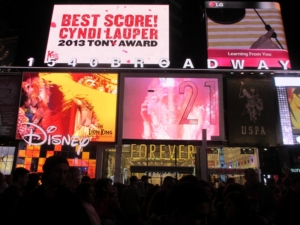 New York was very interesting and we had a packed schedule of just two and a half days.  I was very glad that I had ordered the express tour option for the Empire State Building, as we had tickets to see Jersey Boys on Broadway.  We also visited the Statue of Liberty, Ellis Island, Grand Central Station, the Dakota building (under scaffolding, so nothing to be seen), Central Park, the roof terrace at the Met, Times Square, Tiffany’s (I love the film), walked through Brooklyn Heights and across Brooklyn Bridge, the 9/11 Memorial and Greenwich Village.  The Hampton Inn on 39th Street was excellent for us. Location, Location, Location!

And then - Chicago and a bit more relaxed schedule!  This was the most up-market of the hotels we stayed in (the Allegro)!  We went to the Skydeck and then I walked to Millennium Park and saw the Cloud Gate aka Bean sculpture as well as the water front, followed by a walk along the riverside trail back to the hotel.  I rode the “El”, walked Navy Pier and visited some of the shops on the Magnificent Mile on the only full day we had there.

Our Route 66 adventure began as soon as we picked up the car (a Dodge Journey) from the local depot and set out.  All my route preparation paid off, as did all the scouring of the internet for tickets/details.  We found we were never able to complete the full day’s worth of sights and always had to hop on the interstate towards the end of each day, but were able to see most of the highlights apart from missing Lincoln’s tomb and home on the first day due to the car problems: we lost 2 hours of travelling time on the first day with the hire car, as we found that none of the auxiliary power points worked and the GPS went nearly flat (fortunately Dave had brought a power cell and we managed with that, but it took three different attempts to find a blown fuse – even the Dodge dealership we went to had trouble locating it – before the issue was resolved).  The only thing I would probably have done differently is miss out the Chain of Rocks bridge at the beginning of the second day, as it wasn’t that interesting.  What you actually need to have with you is the relevant GPS, the latest copy of EZ66 Guide for Travellers by Jerry McClanahan and a copy of the Route 66 Travel Atlas (the Mother Road) from ITMB publishing.  This will see you right under all circumstances (including the three road closures we came across!).

So on day one we visited the Gemini Giant in Wilmington, Funks Grove sirup (but they had sold out), the Palm Grill café and Paul Bunyon giant in Atlanta (Illinois!), sadly passed through Springfield (again Illinois, missing Lincoln’s tomb opening by 15 mins) and the Ariston Café in Litchfield, before spending the night at a Motel 6 in Troy. 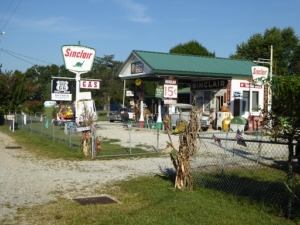 On day two we visited the Chain of Rocks Bridge, Gateway Arch and Ted Drewe’s Frozen Custard (yum) in St Louis, the Cuba murals, giant rocking chair at Fanning (as seen on Billy Connolly’s show) and Devil’s Elbow (where we had a great meal in the biker inn there) before heading on to the historic Rail Haven in Springfield (Missouri) for the night.

Day three we stopped at the Gay Parita in Paris Springs, Boots Motel in Carthage, had fun in Galena (Kansas) with the Dorothy cut-out and the Blue Whale in Catoosa (Oklahoma), plus a night visit to the Oklahoma Capitol Building.

The following day we spent time in the Cowboy Museum (OKC), dropped in to Lucille’s gas station at Hydro and enjoyed the Route 66 museum in Clinton (excellent), with a further call at the U-drop Inn in Shamrock (Texas), where we met a group of German bikers who were also staying at the Big Texan Steakhouse Motel in Amarillo.  The motel is made to look like an old style western town.  No, we didn’t do the 72 oz. steak challenge but saw someone who attempted it – when we left he had 20 minutes to go and still half a plate!

From Amarillo we paid a brief visit to the Palo Duro Canyon (interesting but the comparison to the Grand Canyon was not true) and Cadillac Ranch (to pay tribute to Mr Springsteen), before heading off to the MidPoint Café in Adrian and on to Tucumcari.  We managed to arrive mid-afternoon in Tucumcari (partly due to the time change!) so had more time to explore the murals and really enjoy our stay at the Blue Swallow Motel (they had the best towels of the entire trip J).  We also found they were having a Fired Up event that evening (fire eaters, circus act, music, cannon firing and fireworks), so we went to that to experience local life.

Then it was the turn of New Mexico, with a side trip to the Blue Hole in Santa Rosa, Las Vegas (yes, they have one in NM!), Pecos Pueblo ruins and a couple of hours in Santa Fe and then on to Albuquerque.  We ate at the Route 66 diner but when I wandered around Central Avenue (where the diner was) there were loads of homeless people, which was both sad and slightly intimidating.  The motel here was the noisiest (bar the Motel 6) but the breakfast m

ade up for it somewhat.

After a brief stop at the Continental Divide, we headed into Arizona and spent some hours driving the loop through the Painted Desert and Petrified Forest National Park (I can highly recommend them), before spending the night at the Wigwam Motel (yes, a “real” concrete wigwam with bathroom, which was fun but a bit noisy with the constant trains passing) in Holbrook.

Day eight included the obligatory stop in Winslow to visit the “Standing on the corner” tribute to the Eagles, an interesting (but highly expensive) side trip to Meteor Crater, before wending our way via the Little Colorado Gorge to the Grand Canyon, entering at Desert View.  We stayed at Bright Angel Lodge, so were able to catch both the sunset and sunrise (6am, groan) from almost outside our cabin instead of fighting our way to a viewpoint.  Here we spent an extra night so as to explore the Rim trail properly (despite a bit of rain, our only damp spot in the whole trip).

We then started day nine with a surprise (for Dave) helicopter trip over the Grand Canyon.  I had booked the longer tour but that was cancelled due to a thunderstorm on the east rim but the difference paid for front seats!  My first trip in a helicopter and well worth doing to see the Grand Canyon on a larger scale.  A fun stop at Delgadillo’s in Seligman (though we ate elsewhere) and also at Antares Road (to meet Headacus, a giant green tiki head!) before taking the Oatman Highway.  Oatman itself was certainly a unique experience with the wild burros wandering the street and the highway gave you the feeling of how Route 66 used to be.  We then nipped into California to spend the night at Fender’s River Resort (right on the Colorado River) in Needles.

Our last day of full driving included Roy’s Motel at Amboy (in the middle of nowhere), a slight diversion to the Calico Ghost Town at Yermo (more of a theme park than anything else), Elmer’s Bottle Ranch at Oro Grande (what an effort to construct all those “trees”), before arriving at our final motel, the Saga Motor Hotel in Pasadena (which I can really recommend). 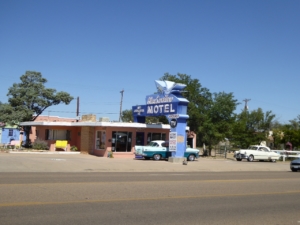 In LA on our first full day we visited the Colorado Street Bridge in Pasadena, Mulholland Drive for all the viewpoints (including the Hollywood sign), Santa Monica and the pier (end of Route 66), Venice Beach and the canals and then a night-time visit to Griffiths Park.  On day two in LA we visited Hollywood Boulevard (all those stars on the pavement but they are planning to put carts on top of the hand prints outside the Chinese theatre!), followed by a nearly three hour tour with Dearly Departed (a mixture of general sights, death scenes and scandals, much more interesting than viewing stars’ gates!).  After that we returned to Griffith Park in the daylight.  On our last day we spent an hour in downtown LA before heading to the airport and the long trip back home.

Obviously the classic motels were the best fun – Rail Haven in Springfield, Blue Swallow in Tucumcari, Wigwam Motel in Holbrook (most authentic) and the Saga Motor Hotel in Pasadena – but they were all interesting in their own way.

About the Author: Charmaine Hallmark 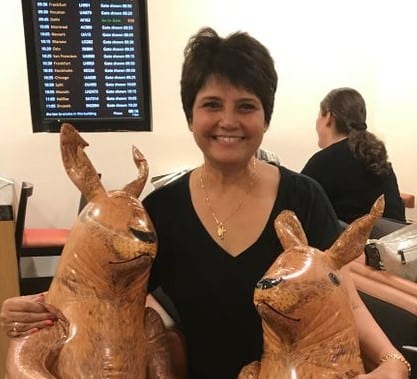 No, I'm not a Travel Guru, but I have loved travelling since I was five years old, and more than love travel... I love to share my experiences... and show you our Wonderful World through my eyes!

Posted in Holidays by our clients